The year 2015 marks the 70th anniversary of the foundation of Kansai Gaidai University.  The small English school established in November 1945 has grown to be an institution of 13,000 students.  With the theme of “Gratitude,” the ceremony was attended by 1,800 guests, alumni, faculty and staff members. 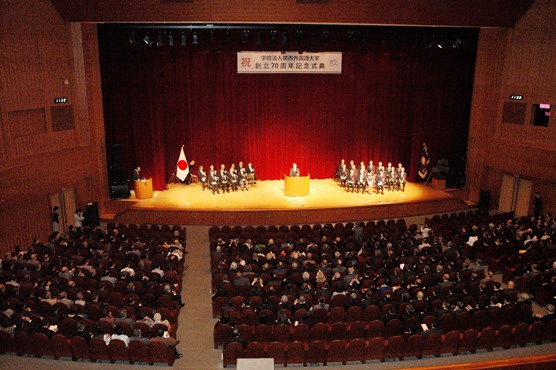 The ceremony began with the screening of the commemorative DVD, highlighting the key developments of the 70 years of history and the current status of Kansai Gaidai.

In her keynote speech, Dr. Eiko Tanimoto, President of the Board of Trustees, expressed  her deep gratitude to all those who supported Gaidai in its 70 years of growth, adding “I would like to share our determination to continue to play a leadership in higher education, become further innovative and courageous, and set our vision to realize a better future of the world.  We will work together to exert ourselves to become an institution which meets the high expectations of higher learning.” 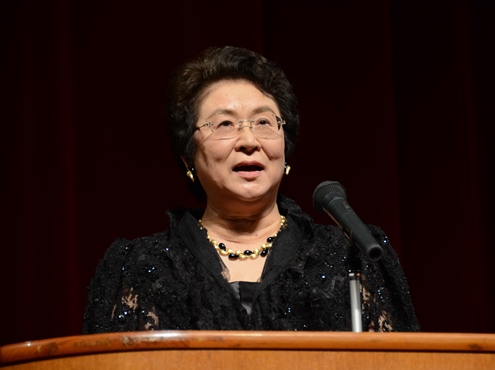 A congratulatory messages from the representative of the Minister of Education, Culture, Sports, Science and Technology was delivered stating, “We sincerely hope that Kansai Gaidai will continue to foster global citizens who will be able to make positive contributions to the further development of the country.” 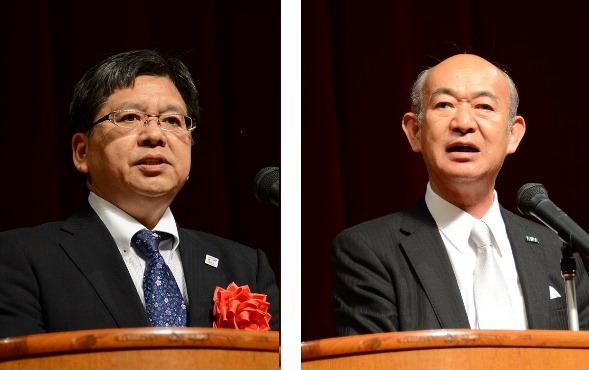 After the remarks by the executive Director of Association of Private Universities of Japan, President Rebecca Bergman from Gustavus Adolphus College (U.S.A.) expressed her appreciation for a long-term fruitful relationship with Kansai Gaidai, representing all the guests from overseas partner institutions. 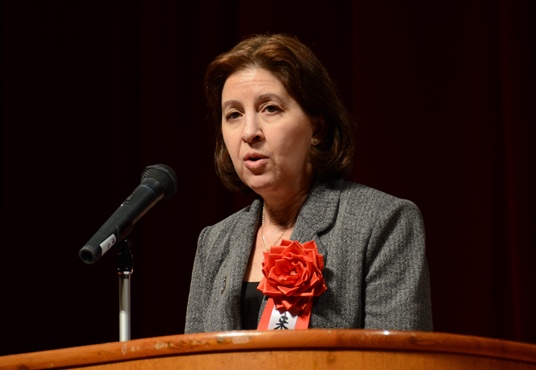 Two student representatives were thrilled to give their speeches while wearing traditional kimonos. Ms. Hitomi Sakiyama gave a speech in English about discovering her real identity, and Ms. Bailey Morgan from DePaul University shared her experiences in Japan in fluent Japanese. 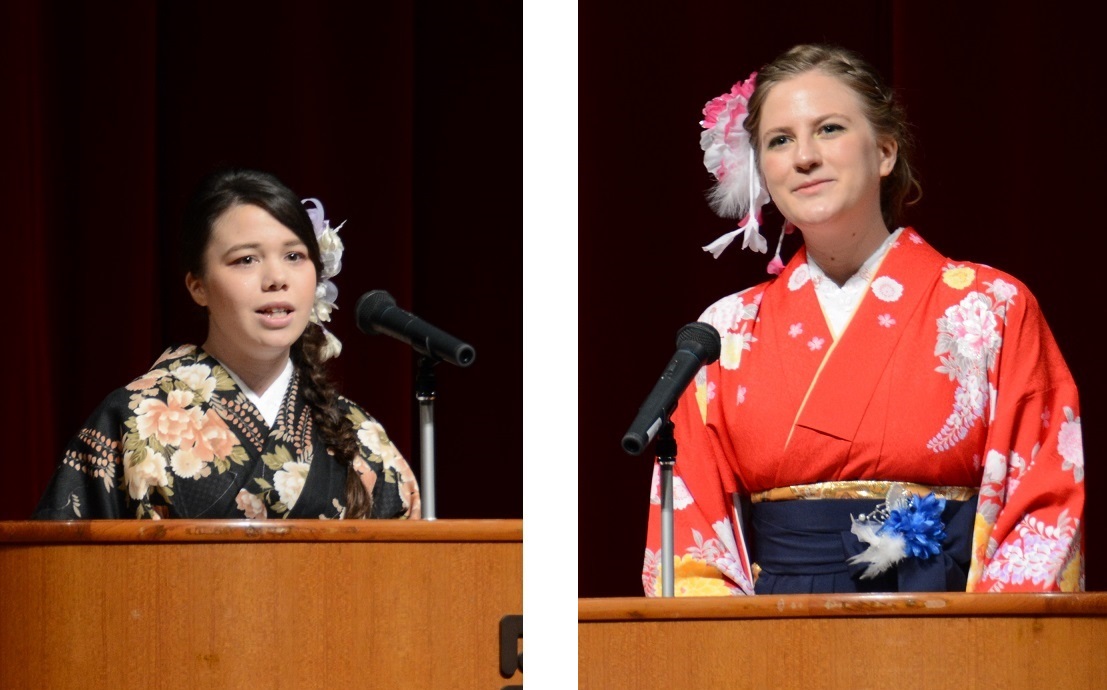 Afterwards, Letters of Appreciation were presented by 15 corporations and individuals, and the Kansai Gaidai Alumni Association presented a commemorative gift to the University.

The ceremony was followed by a splendid musical performance.  The world famous Japanese professional drum group, “Yamamo”, performed in collaboration with the university choir and brass band.  It was indeed a dynamic and breathtaking performance which was enthusiastically praised by the audience.  It was clearly the highpoint of the event. 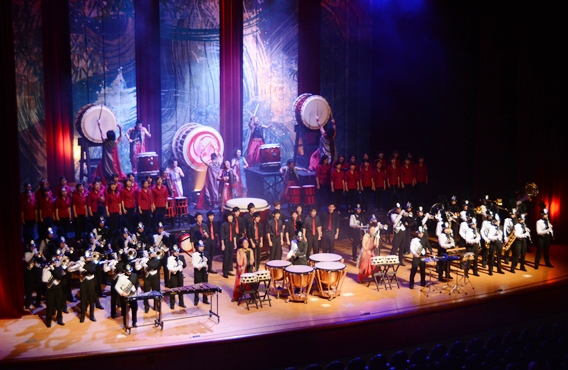 During the reception after the ceremony, the traditional opening of a sake barrel (actually three barrels) was held to celebrate and open the new phase of the university.  Guests were also entertained by a Japanese traditional lion performer strolling through the hall. Receptions were held at two more locations so that everyone could join the celebrations. 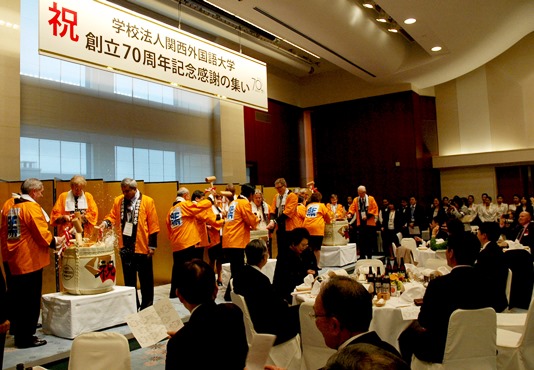 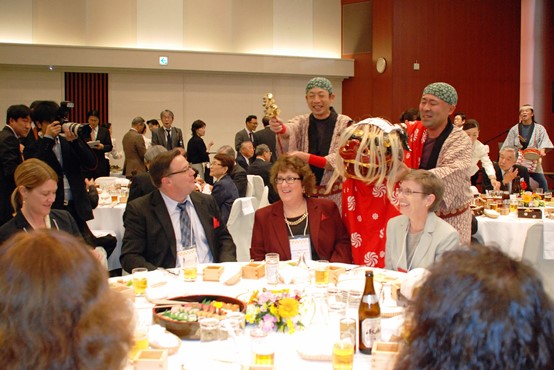 【Summary of President Tanimoto’s Remarks at the Ceremony】

Our path of 70 years was not always smooth but rather full of challenges—the opening of English School right after the war, establishment of the two-year and four-year programs, expansion of the international network, and the list goes on.

We cleared hurdles one by one with support and cooperation from everyone.

The 38 years of Development of Kansai Gaidai written by the late Sadato Tanimoto, the former President, is his autobiography written 30 years ago.  The book describes his strong passion and struggles in his younger days.

He was a student of Osaka University of Commerce, the predecessor of the current Osaka City University, when he was asked by Noboru and Takao Tanimoto to help them open the English school.  Literally wearing two hats, he devoted himself to the preparations by distributing fliers and even renovating the school buildings.

At the time of establishment of the two-year college, Sadato Tanimoto exerted himself to secure land, raise funds and hire teaching staff. Due to insufficient funds, the Ministry of Education seriously questioned the establishment of the school, but he was finally successful.

Immediately after the four-year university was launched, he aggressively approached many overseas institutions for partnerships to accomplish his long-time wish, but those efforts did not bear fruit easily in the beginning.

By making tremendous efforts in developing an attractive curriculum and securing qualified faculty members, he finally succeeded in obtaining approval to offer a doctoral program, the very first of its kind among universities of foreign studies in Japan.  These are just a few of his many achievements.

The motto of the late president was the FURYU, which means “continuous innovation and improvement.” We must make steps forward without remaining the same position with this spirit.

The history of Kansai Gaidai is the realization of this spirit with courage and strong passion for education.

Owing much to your kind support, Kansai Gaidai has steadily made significant steps forward. However, we should not be satisfied with where we stand now.

The environment surrounding us is rapidly changing including the acceleration of demographic aging, and rapid internationalization.  Now we must work hard to further improve the quality of our education to make it internationally competitive. Competition among the Japanese universities is becoming extremely keen.  Today, we reflect upon our history to once again examine our origins, and then carry out whatever it takes to make our university more attractive and unique in order to effectively respond to the needs of today’s society.